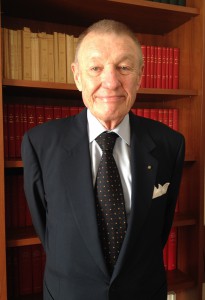 Founder of Studio Legale Pojaghi, he was born in Milan on December 2, 1938.

After his law Degree at the Catholic University of Sacro Cuore, Milan (J.D., Jurisprudence), he began practicing law in 1964 and is registered to the Milan Bar.

Former member of the Permanent Consulting Committee of the Italian Ministry for Goods and Cultural Activities, of the Commission of Claims of Società Italiana Autori ed Editori (SIAE) and of the Intellectual Property Rights Committee (IPR) of the American Chamber of Commerce in Italy. Former Seminary Lecturer in Commercial Law at postgraduate courses at the University of Milan. Former President of Federazione Industria Musicale Italiana (FIMI), of the Managing Board of which he is still member as Past President, and Member of the Managing Board of SCF Consorzio Fonografici (SCF), of which he has also been Secretary. He is Member of the Managing Board of Fondazione Fabrizio De André and internal Arbitrator of Federazione Italiana dell’Industria Culturale – Sistema Cultura Italia.

He is member of the International Literary and Artistic Association (ALAI).

He is member of the Managing Board of the Union of Catholic Jurists of Milan (UGC).

He also speaks and works in French and English.